Israelis see their nation as not just a Jewish homeland but as a bastion of liberal democracy and a defender of progressive cultural values. It is indeed all of those things. But it is also nation-state that has used its military and economic power to oppress the Palestinian people for decades: evicting them from their homes, settling their land, and walling them off from economic prosperity. And in addition to that, it is a country with a national baseball team that is 4-0 in the 2017 World Baseball Classic.

Yet it remains difficult for Israelis to grapple with these fundamental truths. A 2016 survey found that over half of Israelis think that the settlement enterprise has contributed to the national interest of Israel. Israeli sportscaster Gil Barak recently said of baseball that “No one knows anything about the game and this is entirely alien. It’s a sport that has no past here, has no future and has no present.” Worse still, Israel’s sport minister did not even know that Israel was even participating in the WBC, saying “I may be the sports minister but I don’t pretend to know every player and every team in detail.”

The urge to fight against conceptions of Israel as an oppressive state or as a state with a successful baseball team is understandable, but that does not make it morally defensible. Israelis must allow themselves to feel guilt when they look upon the houses confiscated from Palestinians in Haifa in the 1948 war, and to feel pride when they watch Josh Zeid pump his fist after striking out another hapless Cuban. They must recognize the injustice that neither Palestinians living in East Jerusalem nor catcher Ryan Lavarnway have the right to vote in Israeli national elections. They must consider the hypocrisy of spending money on a desert prison for refugees of Somalian genocide while memorializing the prisons where the British imprisoned Holocaust refugees – especially when that money could be better directed toward the national baseball program.

There are some reasons to be optimistic. While Prime Minister Benjamin Netanyahu still supports a significant expansion of the settlement program and shows no interest in making progress on a two-state solution, he did tweet in praise of the Israeli baseball team after the team’s second win in South Korea. We can only hope that the Israeli consciousness will follow suit and awaken to the horrors of the occupation and the endless joys of Jason Marquis’s mid-80’s fastball.

Washington Nationals and Their Run-ins with Crime

Never rear-end a guy who’s head is shaped like a box.

Earlier today, Nationals manager Matt Williams was involved in a hit and run accident while giving an interview to a DC radio station. While you would think something like this is uncommon, it has in fact happened many times throughout the years to members of the Nationals. Below is a list of some of the more memorable times when Nationals players had a run in with the law while on the air.

1. While giving a phone interview while walking through downtown DC, Jordan Zimmermann’s backpack was snatched by a man running by. However Jordan was able to successfully catch the thief after getting him to slow down to a walking pace, since Jordan doesn’t allow any runs.

2. During a Skype interview in the comfort of his own home, Rafael Soriano experienced a case of breaking and entering. The criminal was successful in kidnapping Soriano’s family, after Rafael blew the chance to save them.

3. In a similar case to Williams, Wilson Ramos also dealt with a hit and run while giving an interview while driving. However unlike Williams, Ramos was critically injured, broke every bone in his body and now uses several colostomy bags.

4. In a post-game locker room interview, the entire Nationals team was cited for indecent exposure. They are now required to wear bathing suits in the shower.

5. While giving an interview together during a goodwill trip to the Middle East, Tyler Clippard and Drew Storen were arrested and sentenced to death after being mistaken for a gay couple. They were later freed and returned to the U.S., where they continue to live together, work together, and share a twin bed together.

Despite  an inevitable comeback win vs. the Mets on Opening Day, news for the Nationals isn’t all good. James Wagner reports that Wilson Ramos left today’s game with a broken hand.

This injury marks the earliest appearance of the Curse of the Catcher in a regular season game. While we don’t know how long Ramos will be out for, we do know that Jose Lobaton is about to stuffed down our throats. So if you’re already eating something, finish chewing it quickly.

“You promoted me? Have you seen how our team’s doing?”

Mike Rizzo has signed a new long-term contract and was also promoted to President of Baseball Operations. In other news, I was promoted to CEO of my company for producing a massive shit, so pretty much the same thing.

I’m probably overreacting. Rizzo created a team that did fantastic last year, and is just vastly underperforming this year. Reasonably, he’s not the one to blame.

Unreasonably, he is the one to blame. Fire him! Fire everyone! Burn this whole team down and start from scratch! Just make sure Ben’s Chili Bowl is protected from the fire, that will be the only thing to carry over to the new regime.

Taken shortly after the firing, before the murdering spree.

The Nationals have tried to fix their offensive woes by firing Rick Eckstein. It was a decision made by Mike Rizzo that greatly saddened Davey Johnson. Johnson was quoted as saying, “I’ve experienced a lot of things in my career. I’ve been traded, I’ve been released, I’ve seen a lot of dinosaurs, I was there for all the crusades, but today is arguably the toughest day I’ve had in baseball.”

Rick Eckstein will be irreplaceable. In that nobody could possibly lead this team to as abysmal an offensive output as he is. Sure it might be unfair to completely blame Eckstein, but he’s so small. It’s not like he could beat us up or anything for saying bad things about him.

To replace Eckstein, the team has brought up Rick Schu, the minor league hitting coordinator. I thought Rick was a Schu in to replace Eckstein, and clearly I was right. I just hope he doesn’t give us reason to Schu him off any time soon. 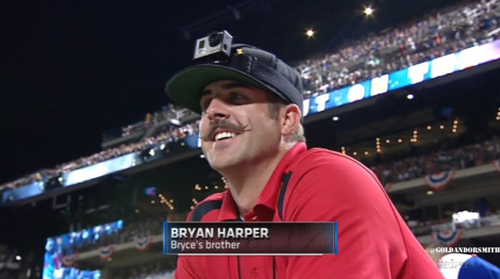 On the bright side, Bryce’s brother won the Camera Hat Derby.

Bryce Harper is a loser. At the age of 20, he’s already proved he’ll never amount to anything. Might as well just give up, pack up, and climb back his mother’s baby chute to try again.

Bryce Harper is a loser because Bryce Harper lost 9-8 in the finals of the 2013 Home Run Derby. To a Cuban, no less! What is this, the Bay of Pigs? I mean come on.

If I were Bryce Harper’s dad, I’d spend the rest of my life standing or walking or sitting or lying next to Bryce, holding my fingers in the shape of an L on his forehead. Just in case any fans or pedestrians or lovers should ever forget that Bryce Harper is a loser who Lost. A lost losing loserman. Is Bryce still young enough that his father can legally change his name without his consent? If son, he should change his son’s name to Lose Loserman. It would be a more accurate description of Bryce Harper than “Bryce Harper.”

Anyway, good luck at the All-Star Game, Bryce! We love ya.

Scott tries to intimidate umpires by attempting to swallow them whole. He has yet to swallow any umpires.

The Nationals have acquired Scott Hairston from the Cubs in exchange for a currently unnamed minor-league pitcher. No, it’s not someone they haven’t announced to the public, it’s an actual person with no name. He had hoped to be drafted by the Yankees years ago, so it wouldn’t pose a problem with putting the player’s name on the back of the jersey. Unfortunately he had no such luck.

UPDATE: The pitcher the Cubs are receiving is Ivan Pineyro. He seems like a decently talented minor league prospect, plus he has hair. I don’t know why you’d trade someone with hair for someone without. You don’t want to ruin the Nationals gene pool.

Final Vote time is upon, which last year for us meant attack ad time. But this year we thought we’d try a more positive approach, and support our candidate with some pro-Desmond ads. So check it out, and vote for Ian at mlb.com/finalvote.

It’s weird that Harper and Zimm are on the team, since most Mets All Star Games consist of players who are not good.

Bryce Harper and Jordan Zimmermann have been selected to the 2013 All Star Game.

Harper makes the team for the 2nd straight year, only this time there is no denying that he deserves it. Last year after being announced as a candidate for the Final Vote, people could simply write programs to repeatedly vote his name on Twitter. Really cheap way to get your favorite player in. But this year people had to actually punch the holes out of all star ballots to get him in, and that takes work.

Jordan Zimmermann makes his first all star game appearance this year. I was worried that since he has a history of being so good with no run support, he’d fall victim to being so good with no voting support. But thankfully he was voted in by the players and coaches, and will no doubt confuse thousands of people into thinking Ryan Zimmerman was selected to the All Star Game.

In addition to these two, Ian Desmond is a candidate for this year’s Final Vote. We can only hope that, considering it is Desmond, there is an error in the voting tallying that somehow gets him in.

I’ve Seen Things, I’ve Seen Them With My Eyes, Like Nationals Winning Games

This is the shirt they gave away, featuring Mr. Met and, uh, I’m not good with faces… Kinda looks like Derek Bell?

I finally got to attend a Nationals-Mets game that the Nationals won. How weird is it that I had to use the word finally? That’s like going to the mall and then leaving and saying, “I finally got to go to the mall without being attacked by a giraffe.” It’s not something you would’ve expected to happen multiple times before, much like the Mets beating the Nats, but somehow it did.

For a while though, it looked like the Nationals would greatly disappoint me again. Through 7 innings, Ian Desmond was the only one who had done anything good. If the rest of our team was made up of quadruple amputees, this would be acceptable. But since the team is not all quadruple amputees, Desmond being to only one to succeed is frustrating. Thankfully the Mets “Metsed,” and had a terrific collapse that allowed the Nats to come out on top.