Leave a comment
By The Giology Professor Spring Training 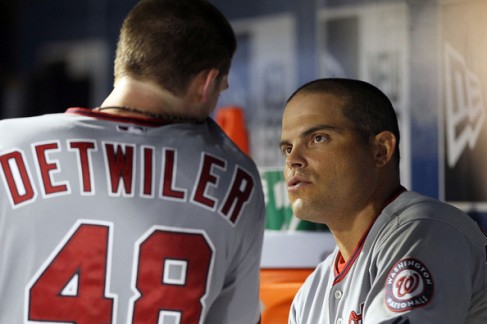 Today's loser, Ross Detwiler, telling surprise visitor Ivan Rodriguez that he just lost to the Houston Astros. Pudge was not happy to have his poop interrupted however, as seen above.

Current National and black man Edwin Jackson, and former National and non-black man Livan Hernandez had quite the duel going until they were both pulled after two innings due to a septic leak in the stadium. After further inspection, it was found out that Livan just smelled bad and all returned to their seats.

Ross Detwiler took the loss, while Kyle Weiland got the win. The Houston Astros plan to unveil Weiland’s bronze statue outside of Minute Maid Park this Tuesday.