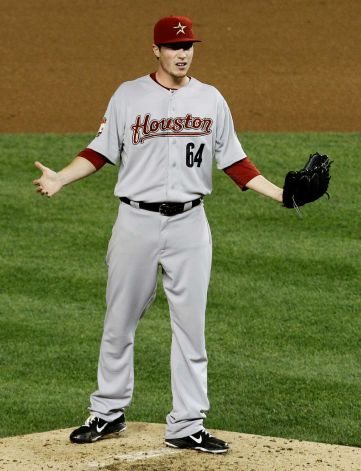 "What? No! My shirt's just baggy!" --Lucas Harrell, after the umpire called him fat.

Fernando Rodriguez: .1 IP, 2 ER, 1 H, 2 BB, Loss. Rodriguez joins Kerry Wood and Carlos Marmol in a club of pitchers who have blown leads to the Nats in the 8th inning mostly by walking people. In this triumvirate of poor and wild relievers, I’d say Rodriguez is the Lepidus…not a particularly great honor.

A lot of those statistics-loving baseball fans who sit around in their mom’s basement crying, pooping and killing flies claim that wins are a bad statistic and are not representative of a pitcher’s actual performance because pitchers have no control over the run support they get from their offense. These computerlubbers might point to Jordan Zimmermann as the perfect example of the uselessness of wins, and at first glance they’d be right. Zimmermann is winless this season despite pitching 21 innings and allowing only three runs. The trend continued tonight: Zimmerman pitched 7 great innings, but the Nats didn’t bother to take the lead until the 8th, after he’d already left the game. So is he just unlucky? I don’t think so. This isn’t a new thing–last year he had the lowest run support of any starter in baseball, ending up with an 8-11 record despite a 3.10 ERA. No, I think there’s a very good reason why the Nationals hitters never score runs for Jordan Zimmerman. It’s because they hate him.

But why? Who could hate a smile as cute as this? 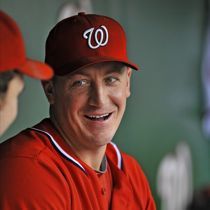 The answer is clear: Jordan Zimmermann must have done something unforgivably horrific to the Nationals hitters. It’s hard to fathom what he could have done that was so bad that it makes the Nats offense seemingly forget what they’re supposed to do with that piece of wood they’re holding whenever he pitches. Here are just a few suggestions of what Zimmermann’s heinous crime might have been:

Whatever the reason, it didn’t matter much today as the Astros graciously handed the Nats two runs in the 8th, just enough for another close and not-entirely-deserved victory. The Nats now have a hearty 2.5 game lead in the NL East…at least until Bud Selig declares that wins against the Astros only count for 3/5 the amount of normal wins. That’s a compromise I’m sure everyone would agree is reasonable.