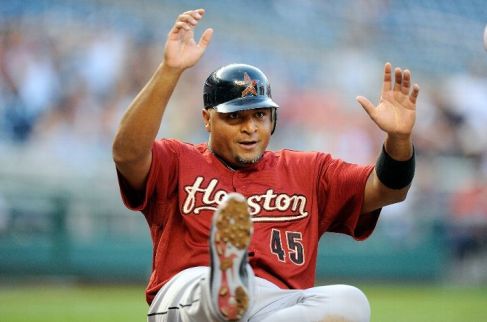 Having the time of his life.
(Photo by Greg Fiume/Getty Images)

Ryan Zimmerman: 1-5, 1 R, 1 HR, 3 RBI. The home run was certainly nice, but to say Ryan was the star having gone 1-5 doesn’t suggest the team was that successful. I couldn’t give this award to an Astro though. I think they have it in their contracts that they can’t play well enough to win an award. What else would explain their team?

Tom Gorzelanny: 2 IP, 8 H, 1 K, 6 ER. Tom Gorzelanny showed us his ugly side today (as he does every day), as his ERA skyrocketed from 0.00 to 7.36. Edwin Jackson was certainly bad, but Gorzelanny gave the Nationals no chance, which is odd since when he goes out clubbing with teammates, their chances increase drastically as the women realize they don’t want to be stuck going home with the Gorzler.

“The Nationals are down 5 runs to the Astros and are coming up to bat for the first time this game.” That’s a sentence that has only been said once before and that was cause a kid was cheating at MLB: The Show. However it was applicable to today’s game, as the Astros somehow managed a 5 run first inning off of Edwin Jackson. The Nationals starting pitching had been more of less manhandling the Astros this series, but I suppose Edwin just wanted to be different. That’s the type of person he is. He listens to emo music, wears all black clothing, and is very rude to his mom. People say it’s just a phase though. Davey Johnson seems to understand though having gone through a period like this as a teen himself. Although he rebelled by voting for McClellan. No emo music was available at the time.

Should the Nationals be embarrassed by tonight’s loss? Yes.

Eh, fine, I guess we can lose to a bad team every once in a while. I suppose I have been spoiled by the Nationals pitching up to this point. I mean they had been doing so well, allowing barely any runs, and even bought me that Barbie dream house. But little Sally had one so why couldn’t I? Now if I can convince them to get me that pony…

The Nationals offense was able to put a lot of men on base today, but did poorly with RISP and left many on. They’re having so much trouble stringing things together that perhaps they should take a Java class. Ian Desmond had an off day today. While this sentence in the past resulted in great amounts of celebratory sex, his bat was missed today. He should be back tomorrow, as should the confused faces of many Nats fans watching him thrive.

Jayson Werth left the game because of a hip injury. Probably cause of skateboarding or wearing jeans that were too tight.

The Nationals open up a three game series at home vs. the Miami Marlins tomorrow. Hopefully the Marlins fail to show up on time, and check out early. We know that’s how fans from there operate.