Drew Storen: 1 IP, 0 H, 0 BB, 0 R. Storen came back and was thrown right into the fire and he did not disappoint. Only the fire had been reduced to a handful of small embers by that point, and nobody was really fighting it anymore. So really the only way he could’ve disappointed would have probably been by actually setting the stadium on fire.

Gio Gonzalez: Loss, 3.1 IP, 6 H, 3 BB, 6 ER, 2 K. Gio is not the rock he once was, having clearly experienced severe erosion. We have to prevent this from happening anymore. No more pitching on rainy or windy days, and let’s get working on having Gonzalez declared a National Park for more protection. If only we had a geyser like Raul Ibanez National Park to really sell them: 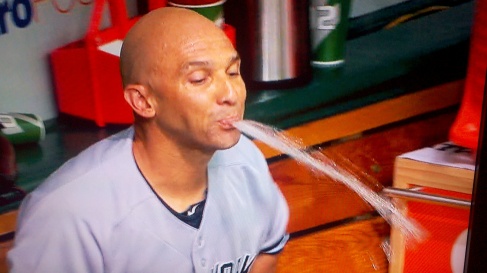 Superstitions are a big part of baseball. Some are unique to baseball like not stepping on the foul line, not talking to a pitcher when he’s throwing a no-hitter, and not high-fiving John Lackey. Actually that last one is more common sense, I think he picks his nose. But one of the biggest superstitions around is the unluckiness of the number 13. This number has proven to be a bit unlucky for both pitchers from Thursday’s matchup, who have encountered trouble in getting their 13th win. Dickey finally achieved it by beating Gonzalez, after weeks of failing to raise his hand when asked “Who wants their 13th win?” Having no UCL certainly has its negatives.

Gio has begun his struggle on the way to his 13th win, having gone two straight starts without a win. I think it’s fair for us to all start panicking. We can’t have someone experiencing such bad luck around our team. I would complain about Tom Gorzelanny breaking that mirror, but I felt bad for the mirror and understand the suicidal act.

I’ve started to start practicing some good luck on my own to try and counteract the bad luck that the Nats seem to be having. I’ve been slicing up rabbits and taking their feet, genetically modifying three leaf clovers, and screaming “STOP IT, STOP IT,” whenever I watch the Nationals losing on TV. I’m pretty certain that last one will work.

Obviously this franchise has struggled for a long time before this season. I was hoping that our bad luck had ran out since that cat crossed our path back in 2002. You know, “The Big Cat” Andres Galarraga. Sure he’s not black, but in America a lot of people make no effort to tell the difference between minorities.

I just hope that Gio’s luck, as well as this franchise’s luck, doesn’t continue this poorly down this road. We may have a 4-3 record since the break, but losing to the Mets just gets you thinking like this. I can imagine how awful teams must feel when they lose players to New York in free agency. Well, except the Red Sox with Jason Bay. That was probably more exhilarating than 2004.

The Nationals will try and break away from the Braves, as Atlanta comes into town for a 4-game series this weekend. If there’s one team bound to have worse luck than this overblown bad luck for the sake of this article that the Nationals are having, it’s a team that has built itself around Native American cultural images. I hear instead of a bus or plane, the Braves have to walk for miles to the away ballpark. If any perish, they just make a move with AAA.