The Worley Bird Gets the Win: Phillies Worm Closer to Nats 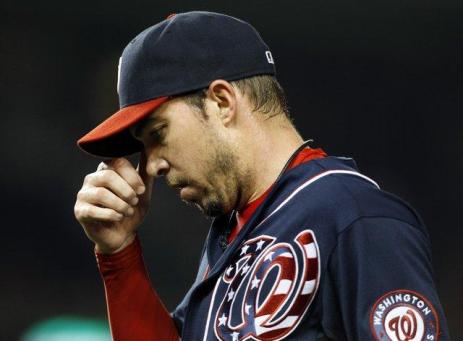 Sean Burnett speaks for us all, for once. (AP Photo/Carolyn Kaster)

None of the above. (just pretend there’s a list of every National who played in the game right above this line)

None of the above, also. Guess we need a new category for this one.

Tame of the Game:

All of the above. The Nationals’ performances ranged from “average” to “mediocre.” No one was really good. No one was outstandingly horrible. Everyone was boring.

Vance Worley and the tattered remains of a team that its fans used to call the Phillies but are now too ashamed to do so beat the Nats last night. If the Washington Senators were affectionately described as “first in our hearts, last in the National League,” then the Phillies should now be unaffectionately described as “last in our hearts, last in the NL East, last in everything else.”

The Nats didn’t really seem to understand why they were playing this game. It was a one run game, so it theoretically should have been exciting to watch, but instead it was more like watching paint dry on growing grass. On the outcome of the game rested the difference between the Nats being 16.5 games ahead of the Phillies and being 14.5 games ahead. The Braves lost to the Marlins, so the Nats were free to lose as well without much consequence.

I feel that such a mediocre game merits a mediocre blog post. As such, I will conclude these fairly uninteresting paragraphs with a replacement level joke. Presented below are some lists that serve as a metaphor for the Nats performance in this game.