I Left My Steroids in San Francisco: Nats Are Going Home To City Not By a Bay With a Win 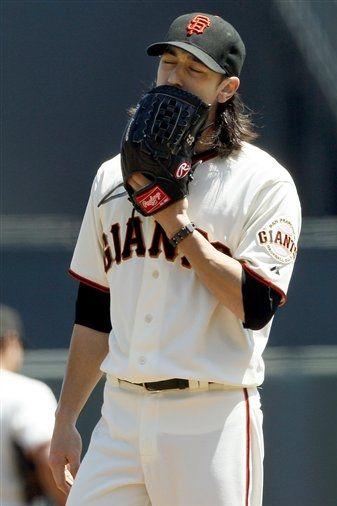 Time Lincecum would have had to hold his glove up a little higher to effectively hide the fact that he was sleeping. Also, he would have had to not be the starting pitcher of an ongoing baseball game.  (AP Photo/Jeff Chiu)

Danny Espinosa: 2-4, HR, 2B, 2 RBI, R, 2 K. Once upon a time, Danny Epinosa was having a horrible season. Now he’s having a league average season. And he lived average-happiness-level-ly ever after.

Melky Cabrera. While he was not technically in this game, this is retroactive to all previous games he played against the Nats when he was cheating. No one cheats against the Nats and gets away with it. No one except the people who haven’t gotten caught, that is.

It shouldn’t come as that big of a surprise that so many Giants take steroids. Barry Bonds, Guillermo Mota (#s 2 and 1 in historical importance to the franchise, respectively) and now Melky Cabrera. It’s been right under our noses this whole time. Right there in the name, in fact. What is a giant if not a man using a ton of steroids? How do you think all the famous giants of myth and legend got so big?

Did Atlas just wake up one day and realize he could lift the entire planet? No, he obviously pumped himself full of man-power-juice, then did some crazy workouts Paul Ryan-style, then grabbed the earth and put it on his shoulders. How did Polyphemus become enormous and mutate himself into only having one eye? A strict diet of pure testosterone, raw vegetables, and raw sheep. Duh. And the Big Friendly Giant? Not so friendly when the roid rage hits.

Which is all by way of saying that of course the Giants are on steroids. Melky was caught, but I have little doubt that the rest of them have some kind of unnatural substances swimming around their veins. Or else they would have changed their team name already.

Anyway, the Nats juiced the juicers on Sunday, claiming a series victory. They beat Tim Lincecum, which would’ve been an achievement in the past but now only requires not forfeiting. I would suggest that if Mr. Lincecum wants to turn his career around, he should stop smoking pot and start smoking pot laced with steroids.

The victory came with a price, however, as the Stephen Strasburg Doomsday Clock ticked ever closer to midnight/160-180 IP. If the Nationals do end up shutting Strasburg down before the playoffs, it will obviously be a serious detriment to their World Series hopes. Many people have proposed solutions to this problem, but I think I’ve found the best one.

The Nats should take John Lannan, get rid of all the stuff inside him like bones and muscles and organs and such, and fill him up with Stephen Strasburg. Then they can start someone who looks like John Lannan but will actually be just as effective as Strasburg! The Injury Gods will be totally fooled, and won’t count “Lannan’s” innings against Strasburg’s total. Then next year we can take out Stephen and everything will be back to normal. Except for John Lannan, whose desiccated remains we’d probably just throw in a landfill or something.

One thought on “I Left My Steroids in San Francisco: Nats Are Going Home To City Not By a Bay With a Win”