The crowd stood and cheered as these two great Nationals walked from the bullpen to the dugout. Clearly, they wanted to savor the last time they were going to see one of them. We couldn’t be sure which one, but it’s safe to assume it was Kurt Suzuki.

Kurt Suzuki: It doesn’t matter what his stat line was. All that matters is the love for him in our hearts.

Tyler Clippard: .2 IP, 3 ER, 3 H, BB, Loss. It does matter what his stat line was, in that its terribleness directly led to the Nats losing the game.

We could tell from the moment we walked into the stadium that there was a special atmosphere in the crowd. They were excited, but it was a bittersweet excitement. Clearly they expected to witness something great, but they wouldn’t get another chance to see it for a long time. Though we were initially unsure of what that greatness could be, upon seeing the Nationals battery emerge from their bullpen warm up, we knew. People were standing, cheering, giving their adulation to the player who had given them so much joy over the course of this season.

We of course are referring to Kurt Suzuki. Truly the most important cog in the Nationals machine. The cog to end all cogs. No other player could have provoked such a response. The implication was clear: the evening’s game would be the last that Kurt Suzuki would play at Nationals Park, and the fans were saying farewell. We took our seats and watched history unfold.

Though the Nationals starting pitcher did pretty terribly, Kurt Suzuki was everything anyone could have hoped for. Catching pitches. And so on.

The Nats honor Kurt Suzuki’s marvelous season by showcasing the only game he’s ever loved: tossing sausages in a bucket.

The starter was knocked out after just three innings, but no one seemed to care. They only had eyes for Kurt. Though he was clearly too emotional in his first at-bats to do anything productive, he would grace those eyes with a wondrous RBI double to help the Nats dramatic comeback in the 7th. 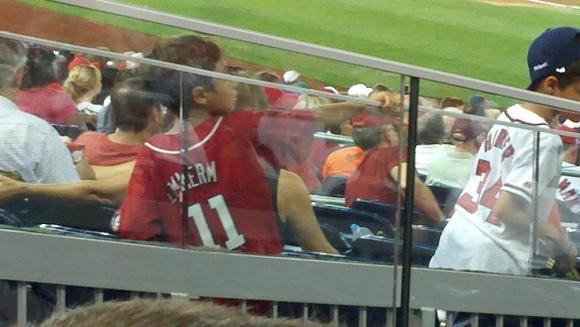 This kid will only be allowed to complete the “man” on his Zimmerman shirt after his Bar Mitzvah. 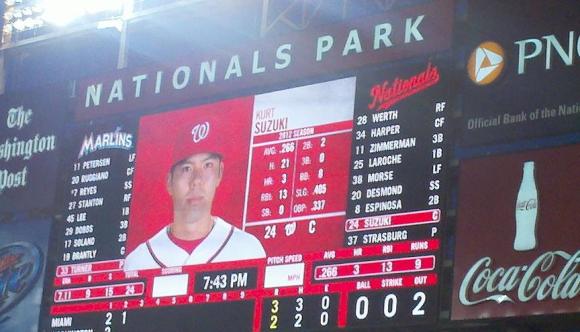 The fans needed some distraction from the pain of losing Kurt, and the Presidents Race will always cheer even the most forlorn of souls. Except for the ones hoping for a Teddy victory, who should probably just become Cubs fans anyway. 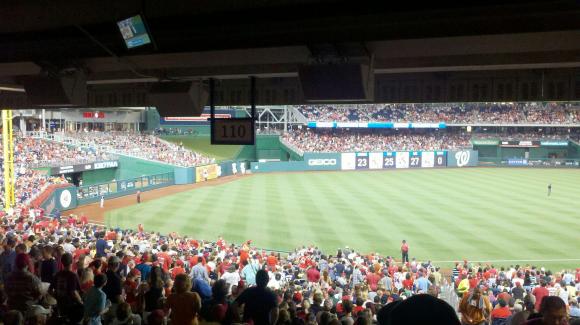 This Presidents Race proved why Teddy Roosevelt is known as the Trust Buster. If by “trust” you mean “Abe Lincoln” and by “buster” you mean “tackler into the left field corner.”

You can bust my trust any time you want, Teddy.

Alas, the Nationals did not see fit to give Kurt Suzuki a fond farewell. After the Suzuki-ignited comeback was completed, Drew Storen struggled through his inning of work, saved only by a great throw from the oldest man in the park–so old that he would fit in better in Jurassic Park: (Oh!)

We’re of course referring to the Asian man in the corner.

Trying to make his paramour feel better about his lackluster outing in a way that didn’t involve insertion, Tyler Clippard similarly allowed runners on the corners with one out. He took things just a bit too far, as he couldn’t hear Drew shouting the safe word over the booing of the crowd, and allowed three runs.

The Nationals mustered another attempt at a comeback in the bottom of the 10th, scoring a run and putting the tying runs in scoring position with no one out. The next three batters (aside from Kurt Suzuki, who drew a farewell walk) were clearly fans of the All-American Rejects song “Swing, Swing, Swing,” but didn’t have much appreciation for the lesser-known follow-up single “Make Contact, Make Contact, Make Contact.”

They all struck out swinging.

Oh wait! Just realized that all those fans were cheering for Stephen Strasburg’s last home start at the beginning of the game. He’s supposed to be a good pitcher or something, usually. Kurt Suzuki isn’t actually going anywhere or dying. Our bad.