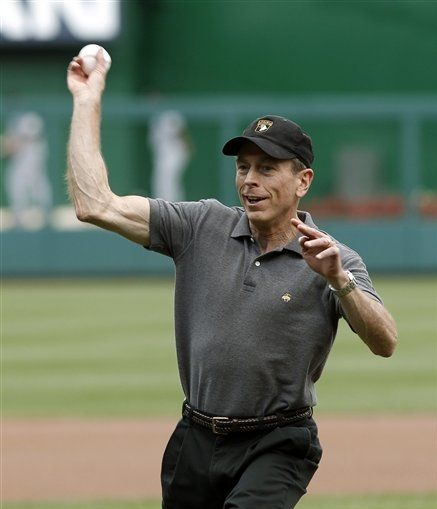 Instead of having CIA-head David Petraeus throw out a ceremonial first pitch, the Nats would have been better off having him call in a non-ceremonial drone strike on Giancarlo Stanton. (AP Photo/Alex Brandon)

Adam LaRoche: 0-3. The ohfer is less shameful than the fact that he, as a cleanup hitter, only got up three times. That’s not entirely his fault, but I’m in no mood to accurately assign blame for this game.

Shut out by Ricky Nolasco again. Let those words swish around in your mouth, get a taste for them. Let them marinate in your saliva. Rrrrrrrrrrrricky Noooolasssssssssscoooooooo. How do they taste for you? For me they taste sorta like sandy mold, burnt and garnished with arsenic. Don’t even bother spitting them out. The taste lingers for a few days anyway.

Never has a hero or villain been so consistently thwarted by such a pathetic nemesis. And for good reason. I mean imagine if Lex Luthor always lost to Superman, except Superman’s only power was the ability to consistently post ERAs of 4.5. No one would like that story.

If the Nats end up going on to win the World Series this year, there will always be an asterisk next to the championship.

*But they got shut out twice by Ricky Nolasco, so on the whole the season has to be considered a failure.”