They’re Not Werthy: Phillies on Brink of Elimination As Nats Gas ‘Em 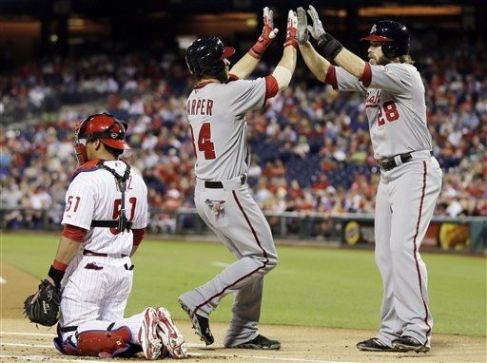 Sorry Bryce and Jayson, but Carlos has to be between you two for you to perform an “Eiffel Tower” properly. (AP Photo/Matt Slocum)

Bryce Harper: 2-5, 1 R, 1 3B, 1 HR, 3 RBI. Bryce got the two hardest parts of a cycle to get tonight. Hardest because they are the most difficult athletically, and also getting to third and home is a little more arousing than getting to the prior bases.

The sound torments Jayson. A constant barrage of this guttural tone echoes in his ear every time he returns to his old home. Although it’s hard to imagine he ever called this place home. Home is somewhere you can find comfort. All he finds here anymore is…

It grows louder. Those present are desperate to remind the man coming up of how they feel. How they feel abandoned, miserable, even amazed that their one time hero could leave so easily. How could he do it? Probably didn’t eat as many cheesesteaks as the average person there, thus rendering him still capable of movement. But these fans don’t appreciate self-betterment. They are selfish. They care only about their own well being, and any man who does anything to make this team worse off is met unconditionally by…

Three things are running now. Ian Desmond on third. Kurt Suzuki on first. And chills down Jayson’s spine. He had shut out the voices before, but never so convincingly within their own habitat. A hit here would, well, maybe make leaving worth it. Or…Werth it! What? Oh come on, you don’t like that pun? Fine, you can…

The battle begins. Pitches! Swings! Downtime! All the things that make up an at-bat. And just then, Jayson spies Suzuki breaking for second. Jayson thinks to himself, “some relief from the pressure!” But no, not even a throw. It is clear. Getting Jayson to fail is the objective. Striking down anyone else wouldn’t be as rewarding for these fans. As the stress weighs on Jayson, it also weighs on the pitcher. A failure here, and he could be met with a familiar sound directed at him. That miserable bellow…

Jayson stares down the pitcher. The pitcher stares down Jayson. The only staring not going on is of a Phillies fan at a mirror, because it’s hard to look yourself in the eye in such a miserable state. And then suddenly. A crack. And…

Silence. The Phillies fans had nothing to say. They simply began to exit (with the help of forklifts of course). The Nationals pulled away. Jayson was a hero in Philadelphia yet again. Only this time for the men wearing grey.

I guess the team would’ve won without Jayson’s extra RBI, since they were up 5-4 previously, and did not give up another run. But I felt Jayson deserved something nice to make up for leaving Philadelphia. You know, aside from $126 million.