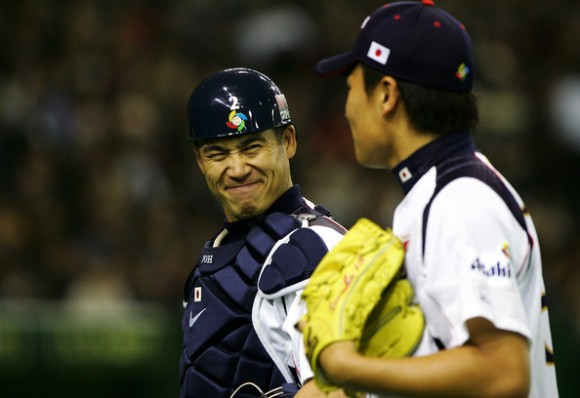 Someone farted. Or, is trying to be sexy. Or, the lights are too bright. Or, something I don’t know what but it’s a great picture.

World Baseball Conflict of the Game: The Nanking Massacre

First Japan nationalizes the Senkakus, and now they easily beat China 5-2 in a World Baseball Classic pool game. When will this saber-rattling warmongery end?

In a game strongly reminiscent of the 1937 Japanese invasion the Chinese mainland, China quickly capitulated to strong offensive and pitching performances from Japan. Kenta Maeda held the Chinese side scoreless through five innings, and a four-run Japan fifth inning kept China on the retreat.

In the late innings China employed Chiang Kai-Shek-eque tactics to keep the Japanese from making any further advances. The war of attrition successfully began to whittle down Japan’s bullpen resources.

China finally turned the tide late in the game, taking advantage of Maeda’s departure much like Kuomintang capitalized on American involvement in the Pacific theatre after the bombing of Pearl Harbor. Unfortunately for the Chinese, baseball games end after nine innings, so you can’t just wait around forever for someone to nuke the other team’s dugout.

If the third Sino-Japanese war starts anytime soon, we will surely look back to this game as the point when violence became unavoidable.