Leave a comment
By The Giology Professor World Baseball Classic 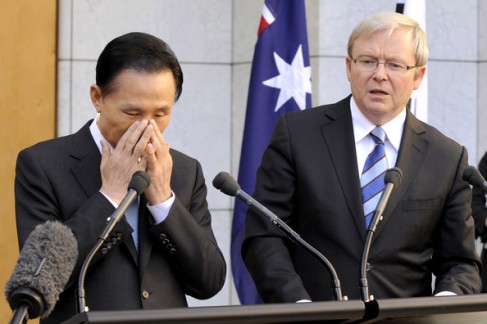 World Baseball Conflict of the Game: Australia indirectly aiding in the liberation of South Korea from Japanese rule in World War II.

When it comes to the relationship between Korea and Japan, no matter in baseball nor other matters of life, Korea has always served as the bitch. Whether it was seeing Japan ruthlessly overpower and devastate the Korean people (ex: 2006 WBC semis or 2009 WBC finals), or witnessing Japan do something less awful but still pretty bad like working Koreans to death during Japanese occupation of their country, Korea ain’t doing well in the win column.

In World War II the Allied Forces worked together to defeat the Axis powers, which in turn led to the liberation of Korea, which then in turn led to hundreds of thousands of deaths, division within a country, and the constant fear of war for decades. But you always focus on the negatives! Lets just look at the positives; the liberation. Korea became free and was finally allowed to compete in the World Baseball Classic.

Now that I’ve explained all this background, let’s get to the game. Unlike the other matchups in our World Baseball Conflict series, this game was representative of a historical conflict that both teams were on the same side of. For some reason Australia has always supported Korea. I don’t know if it’s more because they despise Japan or love the Koreans, but realizing their own futility, Australia set out to help Korea in getting revenge on the Japanese. I mean it was clear that Australia had no hope anyway. Just look at the things in the ocean there. So why not assist another team?

We all know that winning in baseball is more important than winning in matters of life and happiness. So while assisting in the Korean liberation in World War II was nice, it wasn’t as nice as this. Ryan Searle knew this game was important, and that he had a chance to contribute to the happiness of the Korean people like his ancestors had. Plus there was no hope for happiness for the Australian people. Just look at the things in the homes there. No hope.

So Searle’s abysmal performance will be recognized and appreciated by the Korean people for decades to come. Hopefully its one small step towards giving Korea the chance to overcome Japan, just like Australia’s involvement in WWII was one small source of support for freeing them from Japanese occupation.

Where does Australia go from here? Nowhere, cause I’m guessing all the horrible animals ate all the players while they were sleeping.