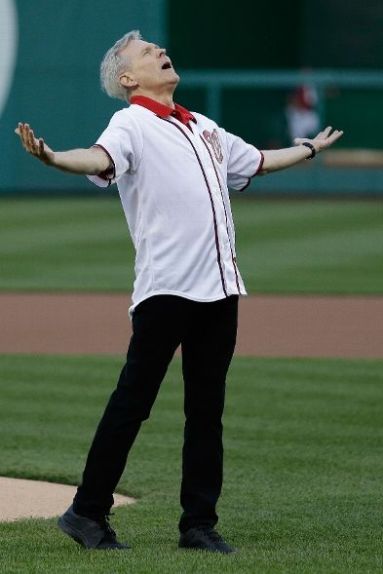 This guy just stood there like this during the whole game. It was weird. (Photo by Rob Carr/Getty Images)

Drew Storen should be using Bad Company as his entrance music. No, not the song he currently uses, but rather a song from the Sondheim musical Company, performed very badly to prepare us for the performance that Storen will then have. We could even take liberties with some lyrics to, again, better reflect Storen’s contributions to the team.

What we do without Drew? Win like we usually do.

Sadly, friday’s game featured Drew, and thus we lost like we unusually do. Although his miserable relief performance was paired with miserable relief performances from Clippard and Stammen. They were also aided in their effort to achieve miserable by a bad Zimmerman error. Combined, the bullpen pitched 3 innings, allowed 5 hits, 5 walks, and 4 earned runs. That’s the worst line I’ve seen since this one: –qq—t-;. Not a very successful line either.

Ramiro Pena brought the pena with a game winning home run in the top of the 10th. You know things are terrible in Washington when Ramiro Pena is doing successful things. Because he is Mexican, and if a Mexican is having success in DC then we have lost the fight! We need to raise the outfield walls to make sure a Mexican never gets over them ever again! AMERICA! 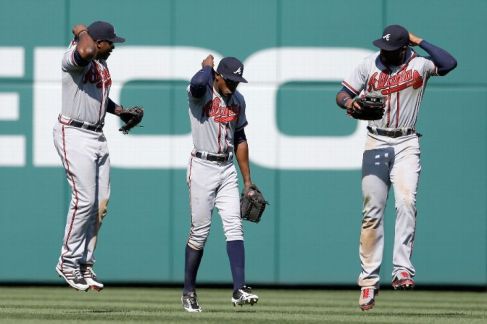 B.J. Upton is really upset that he doesn’t have the same magical ability to hold himself up above the ground like his fellow outfielders. (Photo by Rob Carr/Getty Images)

Ryan Zimmerman is the face of baseball in DC. However, he is clearly not the only star in this town anymore, with guys like Strasburg and Harper amongst others attracting a lot of attention. Ryan feels like the jealous older brother of a newborn, as the parents shift focus to the baby. It’s not that we don’t love you Ryan, we do. But the young ones need our attention so that they grow up well. Please don’t act out in any rash ways to get attention. Please don’t…

Why did you make that error. What did I tell you? You ruined our beautiful new baseball game! Dammit Ryan, go to your clubhouse locker and think about what you’ve done.

What do we do about Ryan? This is the second time in this series he’s made a game changing error. We’re not wrong here, Harper and Strasburg need our attention. He needs to learn that having competent, exciting teammates changes things. I hope this problem doesn’t persist much longer… 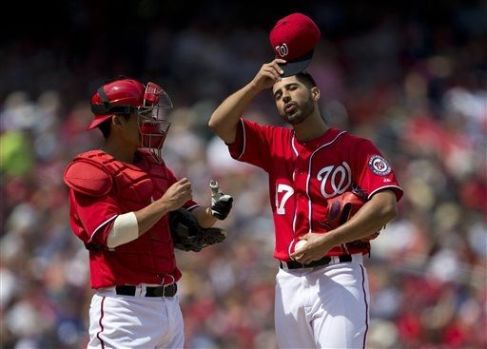 Ooo yeah. Nothing feels as good as taking off your hat after a long day of work. (AP Photo/Evan Vucci)

In this game though, Zimmerman’s error was not the big issue. In fact, it was one of the better things that happened today. It’s like if twenty people died in a bus crash, but one was 100 years old. You’d think it’s awful, but at least that one guy lived a long life so it’s not as tragic as the other deaths. That’s what this game was like. Comparable to a bus crash.

The game started innocently enough, as a pitch was thrown by Gio. Things went downhill from there. The Braves piled on the runs much like one piles on the pounds when the only thing that brings them happiness is eating food, since their baseball team is making them so miserable. I weigh 500 pounds now, up from 180 before this series.

The offense was horrendous. The only starter to get a hit was the one guy you would expect to be productive, Bryce Harper…’s teammate, Ryan Zimmerman…’s pal, Jayson Werth…’s amateur therapist, Adam LaRoche…’s pedicurist, Denard Span…’s personal chef, Ian Desmond…’s babysitter, Danny Espinosa…’s adopted son, Kurt Suzuki…’s idol, Kurt Suzuki. Clearly Suzuki felt the need to step up in the wake of Ramos’s injury, which is amazing considering most Nationals catchers have trouble stepping considering all the injuries. But Suzuki is a special breed of baseball player, one who can do anything. Disclaimer: Kurt if you are reading this, you actually cannot do anything. Do not try to steal from stores, that will end bad for you.

This was a horrible series. The bullpen was horrible, the offense was horrible, and Soriano was horrible. I know, he didn’t pitch. But the fact this team sucked this badly without him making an appearance concerns me as it could mean two things. 1. This team needs Soriano to do well, or 2. This team will be so terrible once Soriano pitches again that we’ll all actually die from just watching the games on television.

The team goes to Miami for a three game vacation, so hopefully they’ll get some well deserved rest there. If we lost to the Marlins, I don’t know what would happen, since nobody has ever lost to the Marlins so there’s no precedent.