I. Love. When This Team Wins. Performances by Zimm. And Twins: A Twins Series Recap 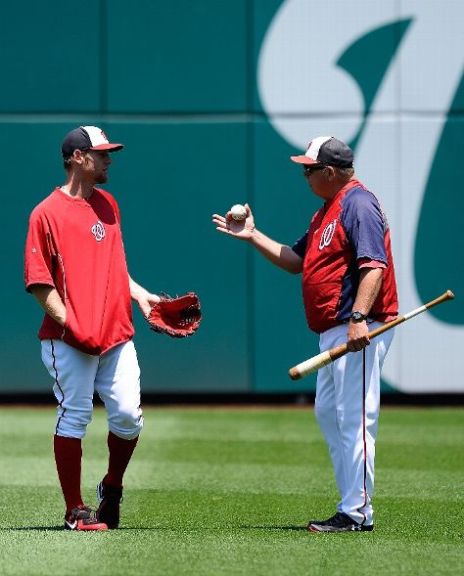 “Stephen, this is a baseball.”
“Yeah…I know. Why do you keep following me around?”
(Photo by Patrick McDermott/Getty Images)

It had been over 40 years since the Minnesota franchise played in their once hometown of Washington. It was 1971, when they lost to the Senators 5-2. Warren  Magnuson had an RBI double, and Karl Mundt went 6 shutout innings.

But those Senators are long dead, as is the thought of a Washington baseball team winning a game. However I suppose the Nats had a chance, as this Twins team’s chances for success aren’t looking very attractive this season. They’re so unattractive in fact, that they don’t inspire any sort of sexual fantasy involving these Twins. Maybe it’s the fact that instead of two attractive women its 25 men, and that’s what’s making me feel that way.

But then again, I got off countless times to the thought of the ’94 Expos, who, to my knowledge, were 25 men as well. Although I wouldn’t be surprised to find out Larry Walker is just a very butch woman.

The game went along pretty uneventfully. Gio had an average outing, running a good deal of baserunners although not letting many come across to score. Sadly he was knocked out after 6 innings which meant it was time for our bullpen to put this game out of reach. For us of course.

So in came Abad who, well, who did fine. .2 IP and 1 hit? I guess you could consider that agood.

But then it was Drew Storen’s time, and he… Uh, he got an out. Weird, but I guess nobody’s perfect. In his case, perfectly disappointing.

Ok, Clippard, you’re fine. You got a scoreless inning, that’s nothing surprising. You’re one of the few bright spots in this bullpen. Oh, that might just be the sun reflecting off your glasses.

Ah, ok. Rafael Soriano. This has to be it, right? Let me go down his line slowly, from left to right. 1 IP, yeah I mean why take him out after the game has already been ruined. 3 hits, also makes a lot of sense. Now let me move my eyes a few millimeters to the right and… 0 runs.

Ok, who the fuck is pulling a prank on me? 0 runs over three innings? With both Storen AND Soriano having pitched? There’s only one reasonable explanation and that’s that Mariano Rivera has killed Storen and Soriano, skinned them, and worn their skin to pitch in this game. But something tells me that isn’t right either.

And then Erik Davis and Ian Krol combined to throw one more scoreless inning.God dammit, where is the disappointment I was expecting? This is the greatest case of blue balls I’ve ever experienced. Someone, please, satisfy me.

THANK YOU. Wow… Finally. That felt so good. Was it as good for you as it was for me? It wasn’t very good for me. 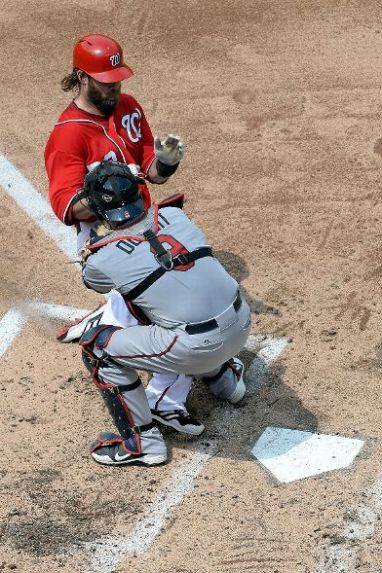 “Whoa man, I’m not into that. Take your hand out of there.” (Photo by Patrick McDermott/Getty Images)

What can you say about Jordan Zimmermann? Well, I can say that he threw another fantastic start, propelling the Nationals to a near flawless victory over the Twins. But just in case you’re still looking for a proper response, here’s a list of 10 good answers to this question:

“Ugh, I knew this team was DFA’ing a lot of trash, but I didn’t know I was gonna be stuck throwing out the bag.” (Photo by Patrick McDermott/Getty Images)

6 scoreless innings for the bullpen? Fuck that, you’re lying. Is anything I’ve ever believed real? Is Tom Gorzelanny really ugly? Is Livan Hernandez really large? Is Davey Johnson really old?

Well, the answer is yes to all those things. But is this bullpen actually capable of having long stretches of successful, scoreless innings? It feels so unnatural.

Nats win, I need to go rethink my perception of the world.

3 thoughts on “I. Love. When This Team Wins. Performances by Zimm. And Twins: A Twins Series Recap”