The crowd applauds Jayson Werth for finally looking up. I find it amazing he never looked up before this game. (Photo by Doug Pensinger/Getty Images)

Every day when I go to work I experience a bit of midday exhaustion. Sitting in front of a computer can be pretty draining, so after about 5 hours my eyes feel heavy and I begin to crash. That being said, when I start getting tired, I do not break every computer in the office and burn it to the ground.

Dan Haren has a different approach of how to react to a midday crash at work. An approach that is arguably worse than burning an office building to the ground resulting in the death of dozens of employees: ALLOWING TWO HOME RUNS AND SUCKING IN GENERAL.

Haren was cruising along for the first four innings. But then in the 5th inning, the middle of the game, Haren became clearly exhausted. Instead of having a coffee, or an amphetamine to reinvigorate himself, he put his assigned work aside and shut his eyes to relax. Sadly when a pitcher closes their eyes, they have no idea if they’re throwing horrible pitches, which Haren did. And his terrible productivity lowered the morale of other Nationals employees, who failed to produce at a high level as well. All in all, this was not a good day around the Nationals office.

Sadly, Haren’s bosses did not consider his failure to complete his assignments that terrible an offense, as he remains on staff. No cut to his salary, no temporary suspension, no nothing. I can’t believe how much this office is falling apart. Next thing you know, we’ll be getting reports to HR that Drew Storen and Tyler Clippard have been grabbing everyone’s asses a bit too much. 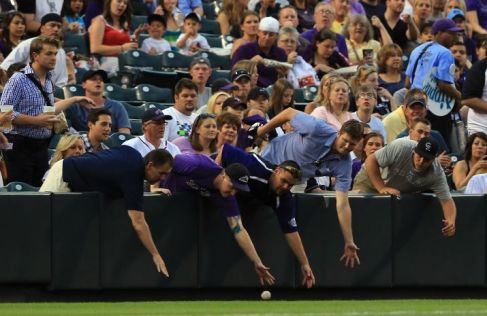 These people were very disappointed to find out that baseballs don’t give high fives. (Photo by Doug Pensinger/Getty Images)

When I heard that Ross Ohlendorf was going to be starting this game, I was concerned. I had experienced Ross with the Yankees many years ago, and he did not do good. And when looking at the Yankees, you don’t often see players go on to have any sort of success elsewhere. Mostly because they were so old and decrepit when they signed with the Yankees, that they die shortly after their stint there.

But Ohlendorf had a great game and led the Nationals to a dominant victory. I think I speak for everyone when I say, “how?” Well, I think I have an answer. You might know that Ross Ohlendorf had an internship at the Department of Agriculture in 2009, so he obviously knows a great about the topic. From this, I can assume he knows at least a little about plants. You might also know that pot is legal in Colorado now. So my theory is as follows…

Ross Ohlendorf timed his call-up perfectly so that it would take place in Colorado, where he had been growing pot since it became legal, and cooked this pot into the Rockies pre-game buffet meal, as to dull their production. 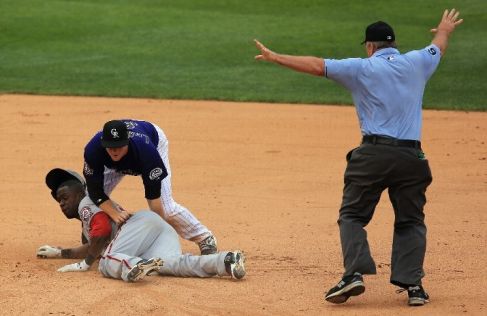 A sleeping Roger Bernadina was rudely awoken by DJ LeMahieu trying to steal his butt. (Photo by Doug Pensinger/Getty Images)

After Ohlendorf started game two of the series, Ross Detwiler returned from the DL to start the finale. And we won again. I see a pattern here, and we better act on it immediately. Hire every single person named Ross to fill this 25 man roster. If we keep running Rosses out there, we’ll win every game, no question.

Ross Gload, Ross Wolf, hell, reanimate Ross Barnes. Even contact David Schwimmer. Do whatever you can to make us the Washington Rosses. No team in baseball history has ever lost a game when starting Rosses on consecutive days, so let’s keep doing that. Sorry Stras, we’re shutting you down again. No hard feelings. Change your name and we can talk.