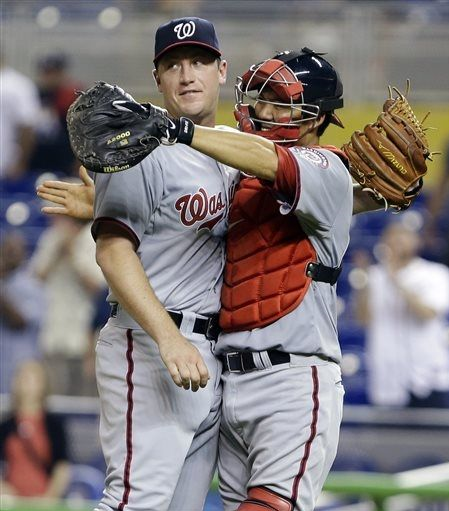 Jordan Zimmermann knows that in Kurt Suzuki’s embrace, he will find a new definition of pain and suffering as he is slowly hugged to death over a thousand years. 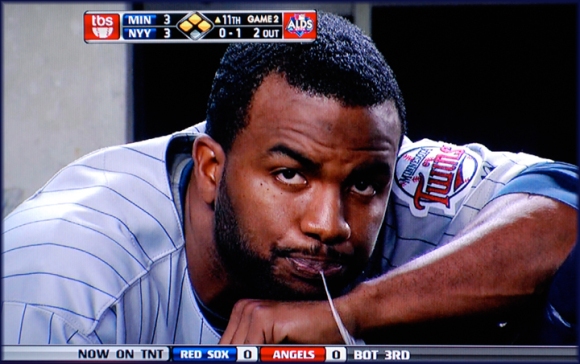 Denard Span’s saliva is worth its weight in saliva.

On January 16, 2013, Denard Span woke up, went to the bathroom, defecated, forgot to brush his teeth, and pulled on his Lounging Robe, which is neon pink and checkered with pictures of his naked body taken from different angles. He plopped down on his couch, flipped open his laptop, and started clicking around on youtube.

Denard Span saw something on youtube. Something that would change his life forever.

He couldn’t contain himself. He tried to resist for a few minutes, but twitter was calling him with its siren tweet-song. At last, at 11:54 AM, Denard Span tweeted the following tweet:

@thisisdpsan: “I was watching some controversial stuff on YouTube about the sandy hooks thing today! It really makes u think and wonder”

It really does. It really makes me think and wonder about Denard Span, and what other odds and ends are meandering around in that crazy ol’ head of his. END_OF_DOCUMENT_TOKEN_TO_BE_REPLACED

Come Out For the Teddy in 2012 Series 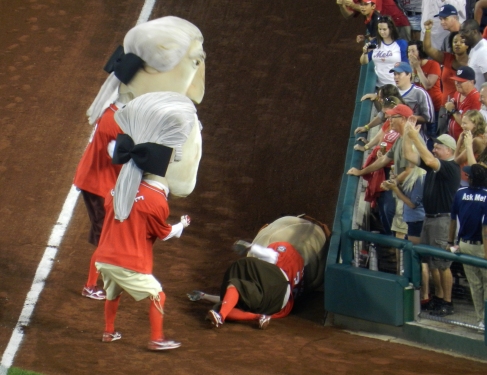 The Nationals have dedicated their last series of the season to the President that everyone loves. No, not Kang or Kodos. I mean the President everyone loves by choice. Teddy! That’s right, as the Phillies come to town from October 1st to 3rd, the Nationals will host a “Teddy in 2012” series. It’s very fitting they’re playing Philadelphia considering most of the Phillies fans, male and female, are as big and hairy as bull moose. You can read all about the series and get tickets here.

The big question for the series is will Teddy win? After hundreds of failures in the Presidents Race, can Teddy finally cross the finish line first? It certainly is possible. But technically so is Mitt Romney winning the Presidential race. Just cause they’re possible, doesn’t mean they’re anywhere close to likely.

I always thought that Teddy winning should be on some grand occasion. I’m not sure if a series vs. the Phillies is the time to do that. Giving your biggest rival a chance to be present for history? Why give them that pleasure. And how do we know one of them won’t try and take a shot at Teddy to prevent him from some grand comeback. To prevent catastrophe, let’s stuff that giant head with folded up speeches.

I guess we’ll just have to see what the Nats decide to do. Maybe they’ll replace the other Presidents with Teddy’s greatest rivals, to make it real special. How about a race like we saw in the 1912 Presidential election? Taft in a rolling bathtub, Dusty Baker can suit up as Woodrow Wilson considering Dusty’s recent unfortunate experience, and a Eugene V. Debs character as well, assuming the person portraying him doesn’t go on strike. 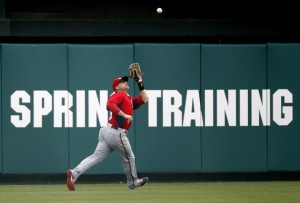 This is how you train to sprin.

Wow. Wowee. Whoda thunk it. Well I never ever. Jesus Christ on a shishkebab.

Half of the Washington Nationals beat a real Big Boy team this afternoon, taking out the Braves 6-3 and salvaging some last scraps of self-respect out of this dismal every-day-is-the-Ides-of March. Adam LaRoche was back in LaLineup after an extended injury-related absence, and wowed the starstruck crowd with a 1-2 performance. Edwin Jackson looked good, while Sean Burnett, perhaps realizing that it was time to practice what he’s actually going to do this season, finally gave up a run. Chad Durbin was…I dunno, really boring? Is there any other way to describe Chad Durbin? What a boring man. 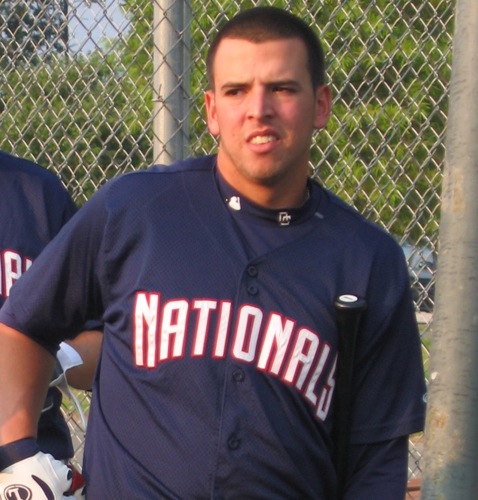 Chris Marrero is on the lookout for his uncle.

Baseball families are not an uncommon occurence in the MLB. From dynasties like Ray, Bob, Aaron and Brett Boone and Sammy, Jerry, Jerry Jr. and Scott Hairston to father-son combos like Ken Griffey Senior and Jr., Steve Lombardozzi and identically-named son, and Jackie Robinson and Matt Stairs (no one knows about this except Matt Stairs’ mother…not even Matt Stairs. so sssssh) What is less common is a family in which just an uncle and a nephew make it to the big leagues. That is the case for the Marrero family, however. Chris Marrero was the Nationals’ first round pick in 2006 and finally made it to the Show as a September call up last year, while his uncle Eli Marrero had a ten year career of backup catching for the Cardinals and then various other teams who quickly stopped wanting him. Eli is perhaps most famous for having Catcher +8 on his 2000 MLB Showdown Pennant Run card.

Eli takes his uncling duties very seriously. He has always viewed it as his responsibility to mold Chris into the successful major leaguer that he never really was and knew he never could be. Eli thought the best way to do this was to toughen Chris up. So, every year on July 2 (Chris’ birthday), Eli, in lieu of sending a birthday present, arranges an increasingly dangerous scenario for Chris to overcome.   END_OF_DOCUMENT_TOKEN_TO_BE_REPLACED

Nationals Poll of the Day!