Do The Nationals Enable Underage Drinkers? 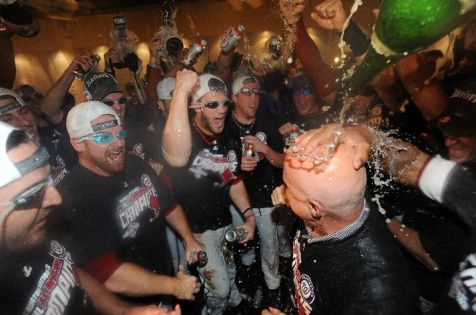 Clearly yes, as seen above. Oh that’s Mike Rizzo? I thought it was a giant baby.

For a while I wondered what the Nationals would do if they clinched a playoff spot when it came to celebration. Most teams celebrate with champagne and beer, but with 19-year old Bryce Harper on the team, that clearly wasn’t a legal option. Certain teams have taken steps to cater to teammates’ needs, such as the Rangers using soda to celebrate with Josh Hamilton. The Nationals could have done something similar for the youthful Bryce. Chocolate milk, perhaps?

But no, the Nationals, Bryce included, celebrated using using alcohol last night. I hate to do it, but I think we should call for the arrest of those involved. In a game like baseball we cannot allow underage drinking to thrive. Steroids, prostitutes and cocaine, that’s fine. But underage alcohol use, no way.

Now I’m sure Bryce might say that he wasn’t consuming the beer and only using it to spray on people, citing his religious beliefs. He famously denied that he would drink alcohol while in Canada earlier this year. Come on Bryce. Are we supposed to believe that? People who handle cocaine don’t just throw it everywhere to make it feel like Christmas. People who use LSD don’t just glue the paper over a spelling mistake when they’re out of white out. Bryce, stop clowning around.