The Moore-al of the Story: Home Runs Help Get Wins 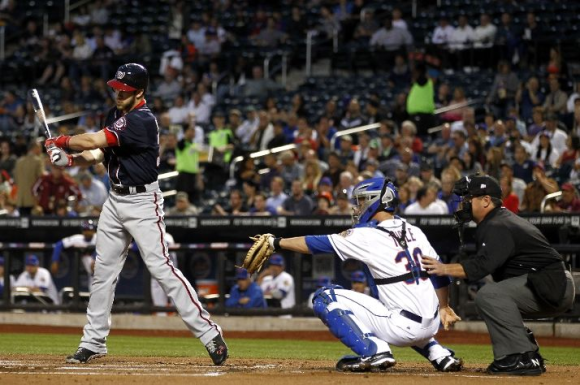 Bryce Harper practices his right-handed golf swing. I think his hands are mixed up, though. (Jeff Zelevansky/Getty Images)

Tyler Moore: 1-1, HR, 2 RBI, R. [Bonus Moore pun] Every time Moore does something good from now on, I’m going to describe it as a “Moore-ality play.” Ideally the Nats would do the same and have him battle the seven deadly sins as he rounds the bases before being greeted happily by the Virtues as he reaches home.

Davey Johnson said after last night’s game that it’s “time to be looking at magic numbers.” Now, in any other context, that would be taken as the mad ramblings of a senile old man or the drugged musings of an LSD user (or in the case of Davey Johnson, probably both). I mean, “magic numbers”? Numbers tend not to have any magical properties, for two reasons: 1) they are really just abstract concepts and thus cannot have physical properties at all that could be magical, and 2) no things actually have magical properties because magic doesn’t exist. Furthermore, the idea that one could “look at” “magic numbers–things that are not viewable and couldn’t exist even if they were–seems preposterous. END_OF_DOCUMENT_TOKEN_TO_BE_REPLACED