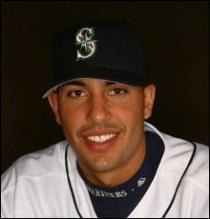 My photoshop skills are quite good. …What do you mean he already played for Seattle and I just used this picture from those days? That’s nonsense.

Mike Morse has been traded to the Mariners as part of a 3-team deal with Oakland. Details were reported by Adam Kilgore. It’s sad that Mike is gone from the team, but what could you expect? He kept telling people to “Take on me, take me on,” it was only a matter of time before someone listened and actually took him. He also warned us that he’d be gone in a day or two, so we can’t act like we didn’t see this coming.

The trade breaks down as follows: Washington gets A.J. Cole back, plus a “good” prospect and PTBNL (from Oakland) according to Amanda Comak. Seattle receives Mike Morse. Oakland receives John Jaso. It’s nice seeing Cole come back, having traded him away in the Gio trade. He’s a talented prospect, and I’m sure Cole will power us to victories down the line, even if it’s bad for the environment. If he makes it to the bigs, it’ll be interesting to see what proves to be the greater, cheaper source of energy for the team, Clean Cole or Gio-thermal energy.

As for Morse, you’ll be missed. Thank you for your contributions to this team the past few years. I hope you find success in Safeco. Although, it is a much more pitcher-friendly ballpark. Those phantom grand slams might be a little harder to hit out.

Update: Blake Treinen will be coming over from the Athletics as one of the 2 previously unnamed players, reports Jon Heyman. I hope Blake has been Treinen hard during the offseason and will be ready to show off in the coming season.

Don’t look so angry, Stephen. It might be Morse who’s out of a spot in our lineup, not you. Why, you’re our best hitter.

Davey Johnson got his Christmas present just a few days late this year. Even though a delay in delivering his gift was a risky move, considering that someone his age could crumble to dust at any moment. But Davey finally got what he wanted, a returning Adam LaRoche.

Just a little while ago, Adam Kilgore reported that LaRoche had agreed to return to Washington. It seems Adam finally caved on needing three years, as the Nationals and he agreed to terms on a two year deal. I think this works well for both parties. The Nats get their star first baseman from last year on a short term deal to see if he can prove himself again, and LaRoche doesn’t have to commit to something for all that long. We know he’s had trouble with that in the past.

While many are delighted by this signing, it could be bad news for Mike Morse. With LaRoche returning, and a new outfielder in Denard Span, Morse is without a spot in the Nationals lineup. Could this be the end of Morse in DC?

I would hate being Mike right now. He’s settled down in DC. I mean how do you think his Twitter handle (@DC_Beast38) would take it if Mike told it that all the friends it’s made mean nothing anymore. That it has to move to a new city and make new friends. That it had to change its name to something yet to be determined. This is the problem with being a baseball player. You have to settle down never being sure how long you’ll stay. And then when you have to move, you have to break it to those you love and ask them to change as well. Poor Twitter handle.

UPDATE: LaRoche is guaranteed $24 million and can earn up to $37 million with a mutual option. Despite all the speculation, its clear that LaRoche had 24 million good reasons to stay in DC:

Kyle’s Team is a Big Fat Bitch, it’s the Biggest Bitch in the Whole Wide League 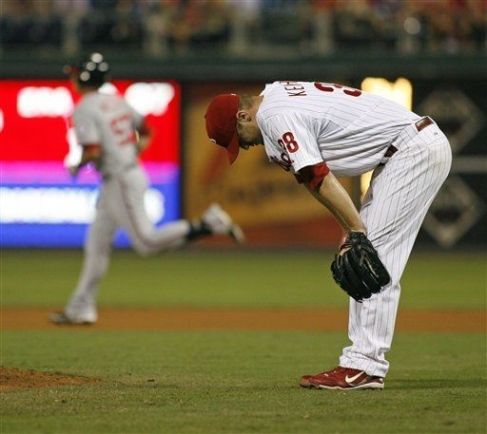 Tyler Moore: 1-1, 1 R, 1 HR, 2 RBI. Tyler was the only National who seemed to think scoring was an appealing idea. I didn’t know this was a team of eunuchs. Although I assumed Gorzelanny might have just cut his off by now since nobody ever uses it.

The MASN Broadcast. Usually a quality broadcast, I must complain that they didn’t blur out obscene content tonight. Sure there’s a lot of them, but when there’s something as shockingly grotesque as Phillies fans’ faces being shown left and right you really have to step up and censor them. Think of the children.

Tonight, the Nationals came into Philadelphia and lost. I guess the phrase “it’s always sunny in Philadelphia” doesn’t hold true for Nats fans. Not only because the game was depressing, but also because it took place at night and the sun isn’t there at night. I wonder what other phrases related to Philadelphia are just bald-faced lies. How about, “The City of Brotherly Love.” Hmm, no that sounds about right. I mean without incest, how would Phillies fans look so deformed.

END_OF_DOCUMENT_TOKEN_TO_BE_REPLACED

Morse just loves the smell of his finger. …I don’t want to know where it’s been. (Photo by Patrick McDermott/Getty Images)

Johan Santana: Loss, 5 IP, 7 H, 6 ER, 4 K. Yo Han, maybe focus a bit more on quality pitching and a bit less on smuggling goods throughout space. Although it is very important for baseball players to learn a profession to use for after retirement. Scratch what I just said.

Mike Morse and Johan Santana have taken two different paths back from injury; Morse has taken the path of success, while Johan has taken the path of playing for the Mets. His supporting cast aside, Johan has done poorly on his own, notably going 0-5 with a 15.63 ERA in his last five starts. When asked what was causing these problems, Johan just kept claiming that he thought it was Opposite Day. This wouldn’t usually work, but considering that most people running things in baseball have the mental capacity of a five year old, everyone seemed fine with letting Johan continue to pitch.

END_OF_DOCUMENT_TOKEN_TO_BE_REPLACED

Which One of You Had That “Morse the Horse” Sign? 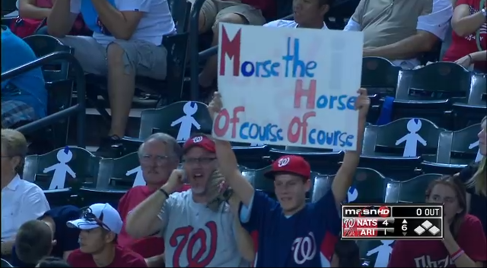 You may remember a few weeks ago I wrote a post entitled, “Morse is a Horse, Of Course, Of Course.” In tonight’s Nationals game, after Morse homered, a fan was shown holding up a sign that said nearly that very same sentence. We ask you, our loyal readers, to help us identify this person. If they are a loyal reader of this blog, then we will applaud them for their creative sign making efforts, and acknowledge them on the site. You may know we appreciate those good signs, as seen here. If they are not a loyal reader though, then WE WILL SUE FOR COPYRIGHT INFRINGEMENT SO GET YOUR LAWYER READY.

The jersey were actually meant to support gay marriage. But the Nationals encountered another embarrassing spelling error. (Photo by Mike McGinnis/Getty Images)

Corey Brown: 1-5, 1 R, 1 HR, 1 RBI. Corey probably didn’t have the best performance tonight, but he hit his first career home run. This award for him is kind of like praising a kid for his first poop on his own, even if he did it in the tub.

Randy Wolf: Loss, 7 IP, 9 H, 1 BB, 4 ER, 6 K. Wolf is always randy. In both name, and because no baseball groupie is lining up to satisfy him given his many poor performances like this.

Today was a big day for Jordan Zimmermann, as many of his family and friends came from Jordan’s nearby home town to see him pitch. While many baseball players are very excited to play in front of family, Zimmermann worried his teammates would make a bad first impression. It’s no secret that Jordan has had trouble getting his teammates to cooperate this year. Thus, he felt worried that his family would think less of them, despite Jordan really caring about them. The situation had the potential to be like Jordan bringing home a girlfriend, only to have her shit all over the carpet and leave Jordan helpless to clean up the mess. So what happened?

END_OF_DOCUMENT_TOKEN_TO_BE_REPLACED

The Nationals at the Break 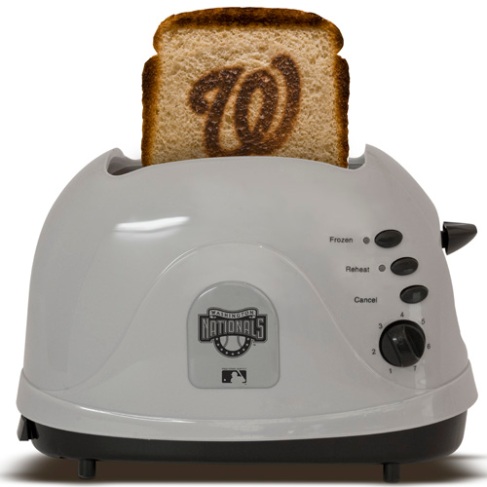 This toaster is just like our season; We burnt everyone and we too had the option for frozen, as it applied to our offense at times.

Here we stand at the midway point of the baseball season. Or, if you’re someone like Rich Garces, here we sit. It’s much too tiring to stand up with all that weight. Baseball has reached a point when many people take time to rest and many others take time to analyze each team’s performance to this point. Given I am unemployed and thus have been doing nothing but rest for weeks, I’ll give the latter a shot and look at how the Nationals have done to this point in the season.

END_OF_DOCUMENT_TOKEN_TO_BE_REPLACED

Just a few hours ago, Bryce Harper lost the election to the final spot on the 2012 NL All-Star team. Many who put a great deal of work into campaigning for Bryce surely feel hurt at this time. But Bryce is a gracious loser, who has accepted the fact that David Freese won the vote. Below is the concession speech that Bryce delivered just moments ago.

END_OF_DOCUMENT_TOKEN_TO_BE_REPLACED 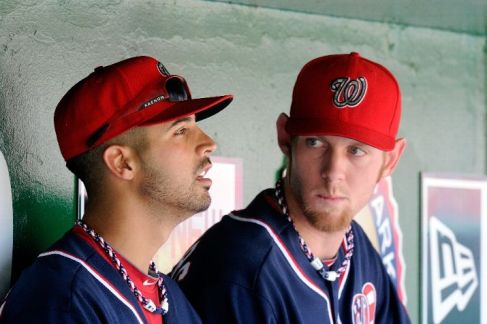 Ryan Zimmerman: 2-5, 2 R, 1 2B, 1 HR, 3 RBI. The Ryan-O proved to be an unstoppable force today. Players like these are an endangered species. I worry that other people in the league will try to kill him and sell his bat on the black market though.

The 4th of July is America’s day. Baseball is America’s game. Washington is America’s city. These three things coming together today could only mean one thing. That thing of course is that the baseball schedule lined up to have a Nationals home game on July 4th. It’s a pretty simple explanation. But still, the Nationals celebrated America’s birthday with a win. They really cooked the Giants, much like a 4th of July BBQ. The game went as easy as a picnic…a 4th of July picnic. The Nationals beat a bunch of immigrants who play for the Giants, much like Will Smith beating a bunch of aliens during an Independence Day invasion. Thus today’s game encapsulated everything America stands for. Food, food, and making life difficult for aliens. God bless America.

END_OF_DOCUMENT_TOKEN_TO_BE_REPLACED 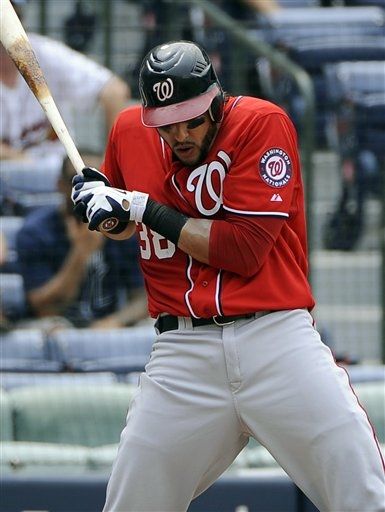 Mike Morse had never realized there was a plate below him to measure the strikezone until today. (AP Photo/David Tulis)

Ryan Zimmerman: 3-5, 2 R, 1 2B, 1 HR, 4 RBI. Zim, Zim, he’s our man. If he can’t do it, no one can! I am of course referring to Don Zimmer in this case. As for what he’s doing so successfully, I’m obviously talking about being a cuddly play thing that will certainly not give you nightmares.

Tim Hudson: Loss, 6 IP, 8 H, 2 BB, 5 ER, 4 K. On a hot day like today, some pitchers would have trouble gripping the ball due to watery perspiration. However this should be no excuse for Hudson’s poor performance. I mean it’s a river, I figured it would be used to water.

On a day that all-stars were announced, it is clear that Strasburg, Gonzalez and Desmond not only earned the right to play in the game, but also took on the properties of a star. Something on that field made it unbearably hot, and I can only assume it was Ian Desmond in his Red Giant phase. But the Nats and Braves played on despite water dripping down their faces, the sun turning their skin red, and Davey Johnson rocking a bikini which he claimed help cool him off. Don’t believe me? Well I would say take a look at this actual, not faked photo…but I don’t want to scar all of you forever. 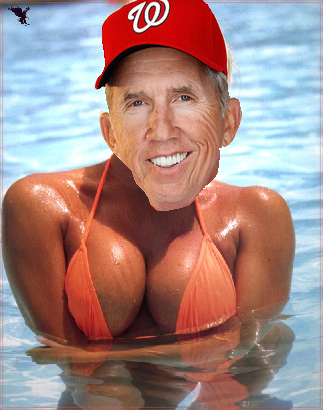