Gonzalez finds the inside of his hat to be amazingly interesting.

The Nationals called up Mike Gonzalez today, adding a once tremendous, twice mediocre, and thrice much too grabby player to their bullpen. Gonzalez will provide another lefty arm, leading the rest of the Nats to be more careless knowing that if their left arms are amputated they have a new backup.

Ryan Perry was sent down to make room for Gonzalez, leading Collin Balester fans to say “See, I told you we shouldn’t have done that trade!” Ok Balester family, please be quiet, the rest of us don’t really care.

Unlike Manny Ramirez, Heath Bell doesn’t walk behind the outfield wall to take care of his business. (AP Photo/Jeffrey Boan)

Roger Bernadina: 1-2, 1 BB, 1 Sac Fly, 2 RBI. Shark attacks occasionally occur in the Miami area. Today we were witness to one of the worst ever recorded. While many have been murdered, dismembered, and other horrible things, the Marlins tonight experienced the worst of it, being mildly threatened by Bernadina in what turned out to ultimately be a losing effort on his part. A horrific and bloody scene, no doubt.

Ryan Perry: .1 IP, 2 H, 1 ER. You tried pitching to Giancarlo Stanton. You are not an intelligent man.

The Nationals must have hired a maid, because we’re no longer the ones doing the sweeping. One series after sweeping Atlanta, the Nationals got a taste of their own medicine at the hands of the Marlins. We’re not quite sure what caused this, but most likely some horrible mutation. Marlins should not have hands. Miami sits just a half game out of first, worrying fans there who know the only way to win a World Series in Miami is by not winning the division. They better start losing if they hope to reach the pinnacle of baseball. (Yes, that’s a convincing enough set of sentences to make them start purposely losing. You can thank me later, NL East.)

END_OF_DOCUMENT_TOKEN_TO_BE_REPLACED

Bryce Harper: 2-3, 1 R, 1 2B, 1 HBP, 1 SB (Home). There are normal men, and then there is Bryce Harper. What? He’s not a woman? I thought with all that makeup…Oh that was eye black? Ok. Well, Harper may be a man, but he’s a much better one than pretty much everyone else. He made a bloop to left into a double, a pickoff to first into a steal of home, and my feelings about my own success much sadder than they already were.

Ryan Perry: .2 IP, 5 H, 1 BB, 6 ER. On a day where Gorzelanny and Burnett pitched, it’s strange that someone else could take this award. But Perry succeeded. Most of the team was doing poorly the whole game, but Perry put the game out of reach in the 9th with this bad bad job. Since the Perry was so unsuccessful, the Nationals failed to riposte in the bottom of the inning.

The only thing Nationals fans will be using their brooms for tonight is to clean up after their fat uncle who eats too much and is very uncoordinated. The “Our Park” series came to a horrific conclusion as the Nationals were overwhelmed in tonight’s game. This game was pretty poor anyway you look at it; you would never think that a baseball game would bear such a striking resemblance to Lenny Dykstra.

END_OF_DOCUMENT_TOKEN_TO_BE_REPLACED

Ryan Perry either likes gum or is not a healthy man.

Ryan Perry was called up to replace the injured Brad Lidge. While Perry is not that great a pitcher, meaning we might have to deal with Brad Lidge as soon as he’s ready to come back, I think I speak for everyone in Natstown when I say GOHSIGGOHSSOIENOBUWOUABWOUNAUSM!!!!

I really do pride myself on my calm demeanor. Really.

The Washington Nationals traded for the Tigers’ one time star prospect and middle reliever Ryan Perry this offseason. To commemorate his first season as a National, I wrote a poem:

END_OF_DOCUMENT_TOKEN_TO_BE_REPLACED 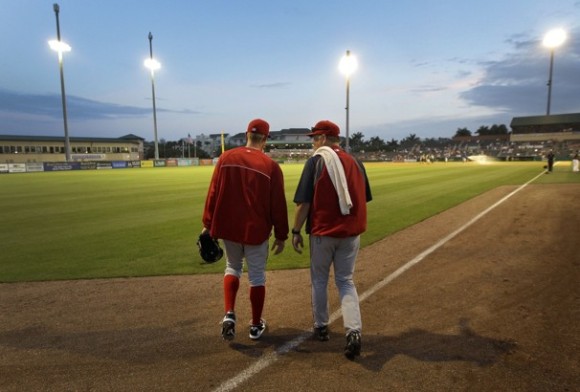 A nice pregame chat about original sin, predestination, the possibility of an afterlife, and how no one wants to be reincarnated as an Astro

It was all going just fine. Everything was according to plan. John Lannan was pitching like a man who wanted nothing more in the world than the fifth starter’s job and Ian Desmond was hitting just enough so that he wouldn’t lose playing time so he could cost the Nationals more wins (but still made an error lest anyone forget his true nature). Just splendid. Just as they drew it up on the Big Board of Things That Are Going to Succeed.

Then in walks Ryan Perry, and he’s had a real bad day. Someone must have made some feces on his welcome mat that says “Hey You! Welcome to Ryan Perry’s Excrement-Free House” and then he must have stepped in it with his brand new feces-absorbent shoes or something. Anyway, he needed someone to take all that anger out on, and instead of picking his opponent like a reasonable man he picked his own team, blowing a 1-0 lead in the top of the 9th and then giving up two more bad ones in the 10th. Thanks for nothing, Ryan Perry. Why don’t you just check your welcome mat for feces next time.