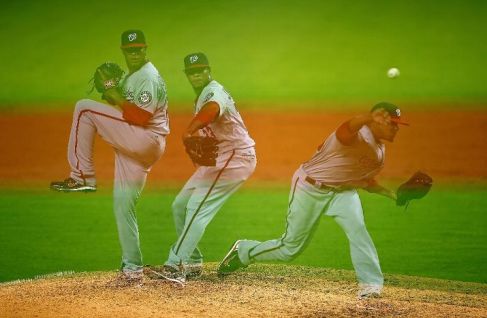 Either special camera effects were used to capture this photo, or Edwin Jackson is actually a set of ghost triplets. And I doubt technology is that good yet. (Photo by Mike Ehrmann/Getty Images)

Edwin Jackson: Loss, 5 IP, 6 H, 2 BB, 4 ER, 1 K. Edwin was wrecked worse than the 1816 ship of the same name. Also similarly to the shipwreck, aborigines took advantage and stole the Nationals postgame meal, and left the players to suffer on their way back to the team bus. Tom Gorzelanny collapsed from exhaustion.

There was no obvious controversy today like the Harper-Guillen bat issue. Today’s game was a much more boring one than previous ones this series. I mean everything was pretty much expected. Henry Rodriguez had control, Carlos Zambrano pitched a quality start, and the Marlins had 30,000 people in attendance. All things we have come to expect to happen so often! It’s like today was just the perfect encapsulation of everything we have come to know in baseball. Danny Espinosa got 3 hits again, Carlos Lee was a valuable asset out of the three spot in the lineup, and Heath Bell pitched a scoreless inning. Again, all anticipated. It’s like we didn’t need to watch this game at all. In fact, we probably shouldn’t have, because it was awful.