Mountains of Det: Detwiler Towers over Cubs in Win 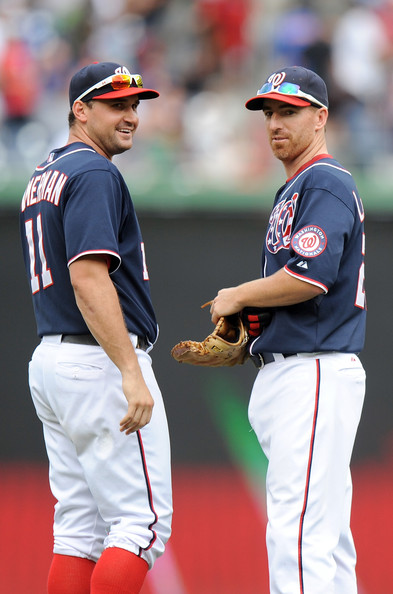 “Hey Adam, see those guys over there? They’re on the Cubs.” “Heh.” (Greg Fiume/Getty Images)

Ross Detwiler: 7 IP, 0 R, 4 H, 3 BB, 3 K. Just in case there’s any correlation between the size of the actual national debt and the size of the National Det’s goodness, I say we start a few more wars, give universal health care and college education to everyone, and build a government-funded tower to the sun.

The Cubs. They’re just an embarrassment to humanity.

82 isn’t a very exciting number in most contexts. It’s a B- on a test, a mildly warm day in degrees Fahrenheit, a normal weight for an anorexic person, and a terrible speed for a major league fastball. But it does have a significance when applied to the number of wins a baseball team gets in a season. 82 is the number that differentiates the teams that succeeded more often than they failed from the teams that failed more often than they succeeded, or worse yet, the teams that succeeded and failed the same amount and thus had zero effect on the universe (lookin’ at you, ’05 Nats. Why’d you even bother?). The Nationals are now guaranteed to finish the season “at least a little bit good,” even if Stephen Strasburg decides to lock the rest of the team in a  closet for the remainder of September because he can’t stand to see them playing without him. END_OF_DOCUMENT_TOKEN_TO_BE_REPLACED 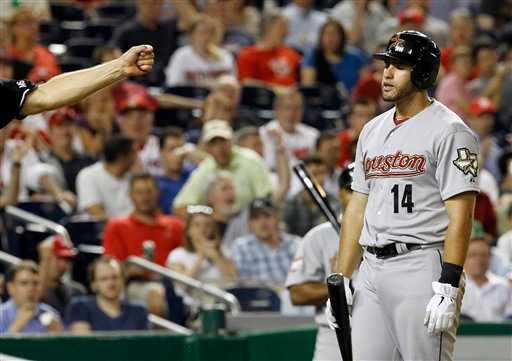 By this point, the Astros are resigned to receiving fists.

Steve Lombardozzi: 4-5, 2B, R, 2 RBI. Stephen Strasburg was good, but Steve(n) Lombardozzi was good and he’s not normally good. Hopefully Mike Rizzo will be nice and let him be king for a day.

Reagan vs. Mondale. Hitler vs. France. Death Star vs. Alderaan. These are examples of contests that were more evenly matched than Stephen Strasburg vs. the Houston Astros. Strasburg made sure that the Astros knew how vastly superior he is to them for five shutout innings that caused many Astros to wonder how their ancestors had managed to survive the process of natural selection. Strasburg let them get two runs in the 6th, but that was just so that he could get a deduction on his taxes by giving a charitable donation. The Astros are really baseball’s equivalent of a starving Ugandan child with AIDS, no parents, and a terrible on-base percentage. Stephen Strasburg is nothing if not a great philanthropist. END_OF_DOCUMENT_TOKEN_TO_BE_REPLACED