London Lidge is Falling Down: Nats Fall to Yankees in Extras, My Fair Lady 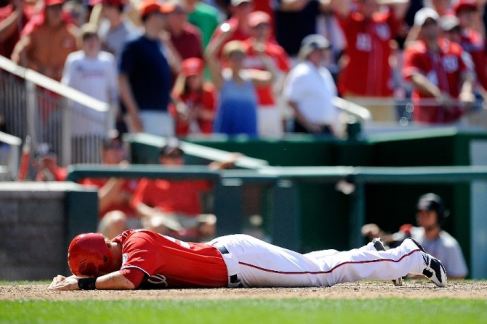 “I love you too, ground,” whispered Moore, as his mouth became increasingly stuffed with dirt. (Photo by Patrick McDermott/Getty Images)

Craig Stammen: 3 IP, BB, 2 K. Craig showed off his Stammena in keeping the Nats alive through many an extra inning. But not even this master of endurance could pitch forever, and his departure brought us a big heaping helping of this guy:

Everyone knows that Bryce Harper’s favorite baseball team is the Yankees, a fact which is understandably concerning to fans of the team he actually plays for. Thus far this year, Harper’s Nationals have endeared themselves to every other Yankee fan, as they swept the Red Sox and have now lost both games to the Yankees. Harper himself played a major role in both series–he crushed Red Sox pitching, but has foundered against the Yankees, culminating in yesterday’s 0-7, five strikeout and game-ending-groundout master class in sucking. I’m not going to say that Bryce Harper is conspiring to make the Nationals lose to the Yankees. That would be a wild assumption based on tiny sample sizes and an ancient quote. But then again, that kind of thinking doesn’t sell blogpapers.