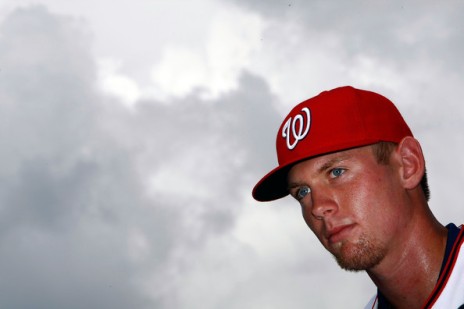 The skies darken. The winds swirl. The seas roil. The earth trembles.

The end is nigh. We knew it was nigh before, but now we know exactly how nigh. I can stop trying to figure out when exactly Stephen Strasburg will be shut down by checking this site.

The date? September 12, 2012. That gives you exactly 10 days to stock up on provisions, build an underground bunker, arm yourself for the anarchy to come, or just try to shoot yourself into space. Because no one knows what horrors we will face in a post-9/12 world.

If This Were the Olympics He’d Be Medlen’: Nats Can’t Top Golden Kris 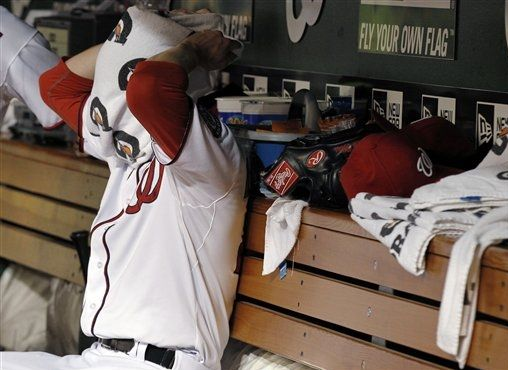 Ross Detwiler is a towelhead. Wait, is that racist? (AP Photo/Alex Brandon)

Craig Stammen: 1.2 IP, 0 ER, K. The fact is, middle relievers only have a chance at this most prestigious award in games that suck. If neither the starting pitcher nor anyone on the offense did anything to stand out, forcing me to delve into the nether reaches of the box score for a Dame, it probably means either the Nats lost or they were playing the Astros. Sadly, they were not playing the Astros.

Kurt Suzuki: 0-4, K, Error. I want to love you, Kurt Suzuki, but sometimes you make loving so hard.

Ugh, I’ve been trying to sweep my floor all day, but I think my brooms are defective. Random side note, had to complain about that to someone. You’d think with all this fancy modern technology they’d be able to make brooms that work, you know?

A dirty floor isn’t the worst of my problems. The Nats lost to the Braves last night, in a game that, had they won, would have put Atlanta practically out of reach of the division title at 8 games back. Sometimes it’s important to put things out of the reach of children, like cookies, guns, and sex toys. The division crown will still be tough for the Braves to grab, but they can at least see it, which means they might be tempted to do something crazy and dangerous like buy a ladder or win all the rest of their games. It would have been safer for everyone if the Nats had not given them the option. END_OF_DOCUMENT_TOKEN_TO_BE_REPLACED 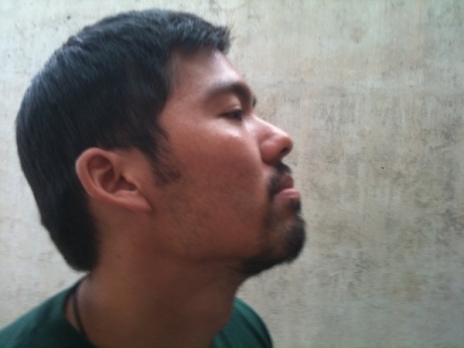 Kurt Suzuki never looks anyone in the eyes because his only goal in life is to never lose a staring contest.

Yo yo yo yo 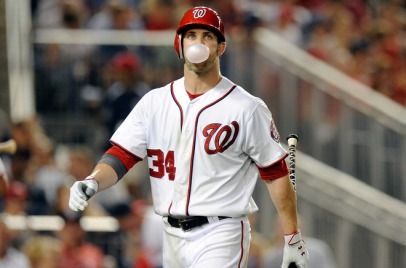 The bubble grew and grew, until it grew so large that it had carried Bryce Harper off the ground and up into the stratosphere. Davey Johnson had to call the Pentagon to send over a Predator drone to intercept him and drop him back down at the field. (Photo by Greg Fiume/Getty Images)

Stephen Strasburg: 7 IP, 2 ER, 5 H, 2 BB, 10 K. And with that, Strasburg passed the halfway point to his 160 IP limit. That innings limit is a joke, right? Ha ha. They won’t actually shut down Strasburg in the middle of a pennant race, right? Heh. Tee hee hee. HO HO HO HO…right?

The offense (ca. 2nd-8th innings).While I understand the sentiment of not bothering to score any more than three runs when Strasburg pitches, you could’ve at least just forfeited those at-bats after the first rather than making everyone watch seven innings of offensive misery.

This was a textbook Nationals win: Strasburg goes 7 strong, Clippard gets the save, the offense does just enough against Chris Archer but still looks horrible doing it, Bryce Harper does a foolish baserunning thing and gets away with it, Tom Gorzelanny doesn’t participate. Great stuff, great pitcher’s duel, good game all around. I don’t have much else to say about it.

Oh, I guess I do have one other thing to say about it. In the 7th and 8th innings, the Nationals faced a relief pitcher by the name of Burke Badenhop. Since he moved to the AL over the offseason, the Nats have not been seeing as much of Badenhop as they used to. Which is sad, because Burke Badenhop is the only major league pitcher who I’ve invented an entire dance for. It’s called “The Badenhop.” It mostly just involves hopping in place.

I invite you to sing and dance along with me as I hop the day away. END_OF_DOCUMENT_TOKEN_TO_BE_REPLACED